In 1899 The Ellersick family of four brothers, their parents and families sold their sawmill business in Minnesota and built a single-band sawmill at the Greenough’s (railroad) Spur near present-day Kootenai. They named their mill the Kootenai Bay Lumber Company (KBLC). The community that grew up around the Ellersick family’s sawmill and adjoining company store was named Kootenai. 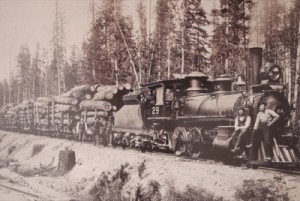 At the time when the Northern Pacific made their decision to come to Kootenai, Humbird Lumber Company owned the town site land, however, it was at that time a dense forest of pine, fir, tamarack and cedar. Within two months, an army of men had cleared the town site of trees and stumps. KTC then platted the town with 80-foot-wide streets and commercial lots reserved for a school, public park and church. 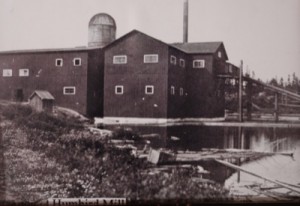 e 1930 after weathering the first two of the depression years, Humbird ceased operation as a lumber firm. All its timber, holding, mill, machinery shops and miscellaneous items were sold to the Weyerhauser Lumber Company. The new firm owned sawmills in many places and had no further need for the Sandpoint-Kootenai mills. Mill workers scattered and stump ranches were sold for a pittance. Humbird Lumber Co. moved on into Canada.

The Kootenai Mill closed down on August 23rd, 1931 and did not operate further. All logging was closed down in August, 1931. The business district died out with the closing of the mill. Many buildings burned down in a fire in the 30’s.

In 1945 during a general election, 20 residents voted and they unanimously make the decision to deed the city park to the school district so the playground would be adequate. Most of the older maps show the NP Ying Yang symbol on this park. The original plans for the park were to have sidewalks in that design.

On June 30, 1910, Kootenai became an incorporated village. In 1967 it became and incorporated city to conform to the change in Idaho law. On Dec 12, 1968 Kootenai’s name was changed from Village of Kootenai to City of Kootenai by Ordinance number 58.

In 2010 the City of Kootenai was pround to celebrate its 100 year centennial, with many long-time residents in attendance.